OzComic-Con comes to Perth on the 2-3 April, 2016 at the Perth Convention & Exhibition Centre.

International media and comic guests such as Karl Urban and Freddie Williams will be joined by an array of local talent, including Gestalt’s own Andrew Constant, Justin Randall and Editor-in-Chief, Wolfgang Bylsma.

We’ll have limited edition copies of new Changing Ways comics by Justin Randall as well as the following titles available for the first time in Perth!

Gestalt’s Editor-in-Chief, Wolfgang Bylsma, will also be presenting a workshop on How  To Pitch Your Story To Publishers, and we’ll be unveiling some more upcoming titles at the annual Gestalt Comics Panel on Saturday at 4pm! 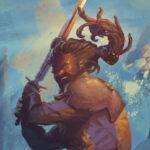