The Example is by Tom Taylor and Colin Wilson, based on Taylor’s short play. It’s a tense psychological drama that doesn’t quite translate perfectly to comics form, but luckily Taylor has Wilson drawing it, which makes it worth a look. I think this would be quite good as a play, because a lot of the tension comes from the two characters speaking to each other, and it’s kind of hard to get changes in voice across in comics. Because, you know, no one’s actually speaking.

But it’s still a neat story. A man in a train station (Flinders Street Station in Melbourne, to be specific) gets grumpy because his train is late. He announces that he’s going to take a bus, and a woman sitting on a bench tells him that’s what “they” want him to do – her theory is that the train is ready to go, but they wait until someone gets fed up and leaves, thereby making him “the example” – see what happens when you suckers leave the station? So then Chris (the man) and Sam (the woman) see a different man leave, meaning the train will arrive soon. However, the man left his briefcase behind. Oh dear.

They begin speculating about whether the briefcase contains a bomb, which leads Chris to remember that the man wasn’t exactly white and wasn’t exactly dressed in business-like attire. Plus he had a beard. You can’t trust beardos, man! In only a few pages, Taylor manages to bring up so many hidden anxieties that white Westerners have and how this world has become a place where trust is a fragile thing. 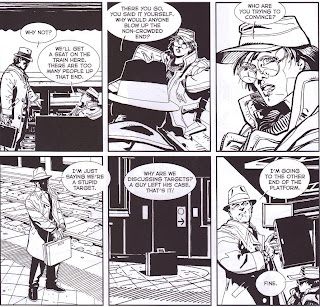 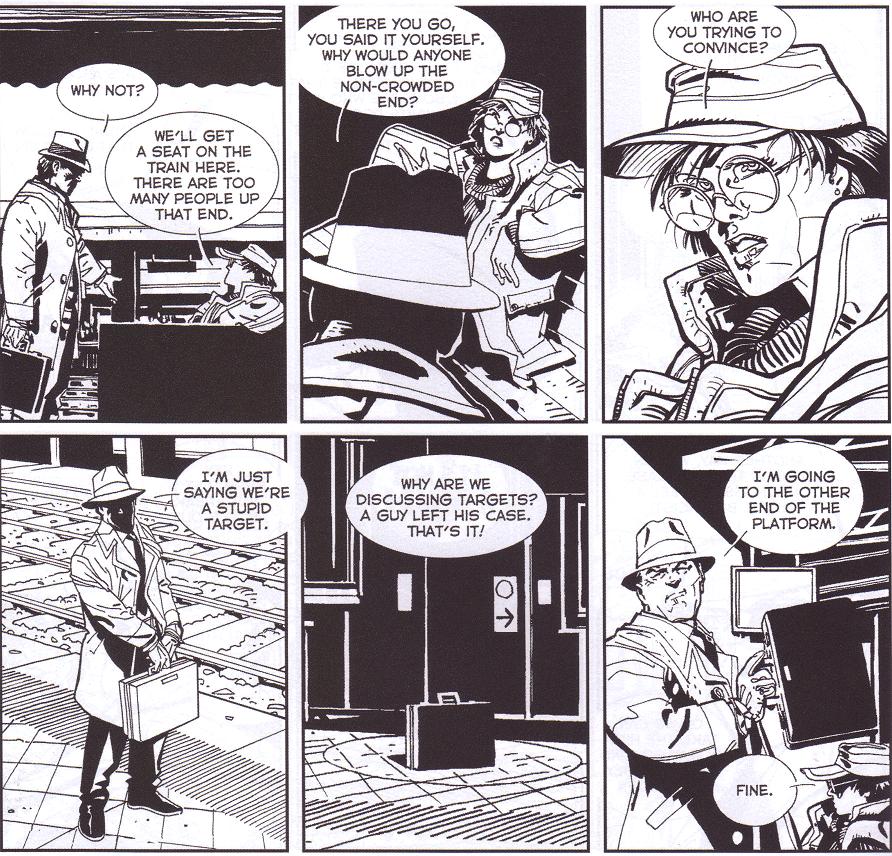 Chris and Sam debate whether they should turn the briefcase in or if they should just leave it, and they argue about their racism and what it says about them. It’s a clever device and Taylor does a nice job distilling the debate into a fine focus. The reason I think it would work better as a play is because good actors can add so much to the tension, and while Taylor does a decent job with the writing and Wilson does a fine job with the art, I imagine something is lost in the transfer to print. I could be wrong, though.

Wilson, as I mentioned, is very good, which isn’t a surprise. He basically has to draw two people on a train platform for 11 pages, so it’s going to be a tough sell, but he’s good enough to nail it. He does a nice job altering the camera angle to add some tension, and he continually drops in panels of the briefcase, sitting ominously in the middle of the platform. He and Taylor structure the book (they write about how they put together the book in the backmatter) so that there’s even a cliffhanger toward the end, which is kind of neat.

The Example is available now (it came out on 15 September), and for $1.95 (USD), it’s not a bad comic to check out. It’s also going to be included in a new collection of short stories about briefcases (yes, you read that right), so that should be neat.